To Whom It May Concern,

I am most thankful for the opportunity to share in this tribute to our mutual friend, teacher, and mentor, Evelyn Eaton Whitehead.

At the tail-end of my year as a novice with the Paulist Fathers, I was fortunate to be permitted to spend the summer of 1980 taking a course or two at the Institute for Pastoral Studies at Loyola University of Chicago, in preparation for entering seminary with the Paulists that fall in Washington, DC. It was their summer session class on “Ministerial Leadership Development” (discussing their newly-published Christian Life Patterns) that first brought me into contact with Jim and Evelyn Whitehead. I have little doubt that were it not for that class, and for the abiding friendship that ensued, the road ahead of me would have proved impossibly difficult.

During my seminary days, I was able on occasion to visit Evelyn and Jim at their home in South Bend. They were terrific listeners, always eager to hear how my training was going. When our Director of Formation, Fr. James Young, CSP, a friend of theirs for some time, enlisted me to help host a mid-winter workshop for all the Paulist seminarians on developmental issues, they were gratified. Later, during my assignment as a campus minister at the University of California at San Diego, I also helped bring Evelyn and Jim to keynote a groundbreaking conference on sexuality for the Catholic Campus Ministry Association in the early 1990s. I still recall how appreciative they were of the work we did to enhance the impact of their presentations. Still later, as a campus minister at Newman Hall/Holy Spirit Parish in Berkeley, we would meet up again, exchanging stories from my campus ministry experience and their fascinating work teaching in China through the auspices of the Ricci Institute at the University of San Francisco. Always engaged, always receptive, always eager to learn and share, ever caring—that is how I remember them. I can only claim to be a modest practitioner of the skills they modeled so well! 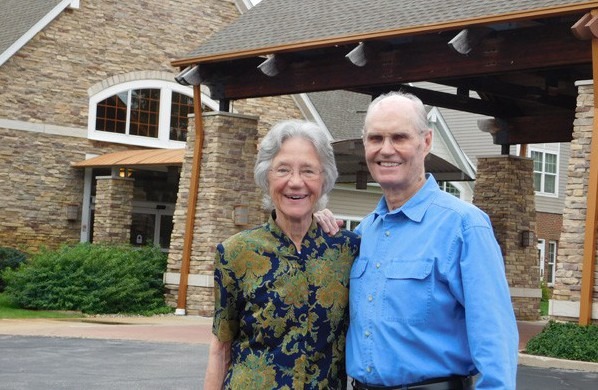 Like so many of us, I’m sure, I was immensely saddened to hear of Evelyn’s death a year ago from cancer. Evelyn and Jim were planning to greet me for dinner together in South Bend in July 2020, but the COVID pandemic made this impossible. However, I was exceedingly blessed to be able to have lunch with Jim this past July at his home at Notre Dame, where he was recovering well from a stroke that happened during heart surgery. Just when I arrived, he had taken his first halting steps without a walker. He was clearly on the mend! We were able to catch up about his beloved Evelyn and about many other things, not the least of which was the impact made on me by that class so many years before.

I was so appreciative of Jim asking me what his and Evelyn's presentation/discussion of Christian Life Patterns did for me all those years ago. I probably babbled a lot in my response to him, but I continued to think about it afterwards, and later shared my further reflections with him in an email. I’ve added them here:

· Evelyn especially gave me a psychological language and a framework for looking at the ups and downs of my life and my development (e.g., I had left my work as a Ph.D. biochemist to enter the seminary), and a tool for beginning to assess some of the more dysfunctional dynamics of my upbringing, as the adult child of an alcoholic. Her energetic, enthusiastic presentation of what could easily have become dry concepts was so refreshing and infectious; for me, it was inspiring as well as novel. (During my sabbatical at Boston College in 2018, slogging through Robert Kegan’s In Over Our Heads, I even mused on how Evelyn would have loved presenting this material; in fact, she did, as I later learned from Jim.);

· The “method of ministry” Evelyn and Jim outlined so well offered me a way of entering into the lives of young students' faith development that I would simply not otherwise have had;

· They each affirmed my writing ability, which up to that point, had been minimal, since I had been primarily a bench scientist and chemistry/biochemistry teacher;

· Out of this experience, one of my reflections for their course ended up being published by Ken McGuire, CSP in the first issue (1980) of his Paulist Pastoral Papers, prompting further Paulist discussions;

· It gave me a keenly fruitful ministerial friendship that I have treasured all these years!!!

Now standing where I am, having been ordained a Paulist for over thirty-six years, and having retired after over thirty years in university campus ministry working with extraordinary young adults, I'm convinced that I never expressed my gratitude to Evelyn and to Jim nearly or profoundly enough. But I have felt this thankfulness ever since that summer of 1980 and in all the years between then and now. May this tribute help to remind all of us of just how influential Evelyn’s life—with that of Jim, her partner in love and ministry—has been for me and for so many others!