A Conference on Religion and Ethics 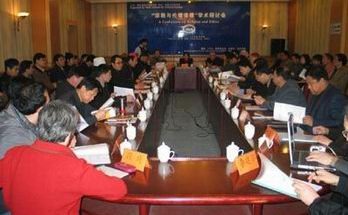 (Faith, Shijiazhuang) On behalf of Five Religions (Buddhism, Taoism, Islam, Protestant and Catholic), the Faith Institute for Cultural Studies (FICS) from Hebei province, China, organized a Conference on Religion and Ethics, February 25-27th, 2005, in the Jingu Hotel in Shijiazhuang City.Five bishops from Hebei province and twelve representatives from other religions (Buddhism, Taoism, Islam and Protestant Church) were present to attend the opening ceremony of the “Conference on Religion and Ethics” (Zongjiao yu Lunli Daode xueshu yantaohui) in the morning of the 25th of February 2005. The most Rev. Bishop Peter Feng from Jingxian diocese led the opening ceremony. Rev. John B. Zhang Shijiang, director of FICS held the opening speech. The representatives of the five religions, Kang Ruifeng, Imam of the local Muslim community, Zhang Liwei, vice secretary general of Amity Foundation and representative of the sponsors,Prof. Ren YanLi and Mrs. Chen XiuFang,the head of the local Department of the United Front (Tongzhanbu) delivered a short address, all of them praising the conference.

Around 40 Chinese scholars from 13 Chinese universities and 5 research centers came to participate in the conference, among them leading scholars in the field of the study of religion and Christianity, like Ren Yanli (Chinese Academy of Social Sciences, CASS), his wife Wang Meixiu (CASS), Duan Qi (CASS), the well known Prof. Yang Huilin from the People’s University of China, the renowned expert on the history of Catholicism in China, Prof. Gu Weimin (Shanghai University), Prof. Kang Zhijie (Hubei University), Rev. Mu Shanlin (Executive Rector of Hebei Seminary), Fr. Li Jianhua (Taiyuan), Rev. Chen Kaihua (Yunnan, an expert on the history of the Church in China), Fr. Peter Zhao Jianmin from Beijing and Fr. Roger Liu Zhe from the seminary of Beijing diocese.

The conference was well organized and besides many papers and speeches on topics related to Christianity and Ethics there were also inputs about Chinese culture and Christianity, even a couple of papers on Daoism and three papers on Islam in China. On the first day of the conference, the participants were taken to the seminary of Shijiazhuang in the north of the city, where they could see the seminary, the Beifang Jinde Catholic Social Service Center and the Faith Press facilities.

This conference in a sense marks a breakthrough, since it is the second bigger academic conference organized by the FICS.
Among the papers presented some highlights were the research of Prof. Gu Weimin on a comparison between Roberto de Nobili SJ (a pioneer missionary in India) and Matteo Ricci (one of the most influential missionaries in China). Dr. Duan Qi also presented a comparison: a paper on the Jesus Family (an indigenous protestant group that started in Shandong in the 1920s) and a Chinese Muslim native movement before 1949. Other topics were “The Spirit of Freedom of St. Augustine”, “The Spirit of Penitence in the Rule of St. Benedict”, “Enlightenment and the Moral Reconstruction in China” and presentations of the foundations “Misereor”, “Amity” and “Beifang Jinde”. Probably the most popular presentation was made by Prof. Wei Dedong of the People’s University, Beijing, who interpreted a Chinese movie (“There are no Thieves in the World”, 2004), which tried to show in an indirect way that religious feelings can help to purify a persons moral attitudes. Many speakers emphasized the nihilism and relativism in Chinese society today and the need for deeper and universal values. One can only congratulate the chief organizer, Rev. John B. Zhang Shijiang to this conference and hope that a similar meeting will be possible in the future.

The symposium on Religion, Ethics and Morality was the outcome of a meticulous planning over a long period and the painstaking endeavor of various organizations. It was eventually held on Feb.25-27 at the Gold Cereal Mansion in Shijiazhuang, Hebei Province, China. It was a great success.

Five Bishops of Catholic Church .and the responsible persons of the other four religions presided at the Opening Ceremony. Fr. Zhang Shijiang, the Director of the Faith Cultural Institute hosted the whole process of the symposium. He also gave the keynote address.

There were three main topics for discussions: (1) Specific practices for fitting religion to the society, (2) Religious dialogues and (3)the Relation between religion and society.

It was the first time in China that religion could be discussed publicly in relation to ethics and morality. It was a good start!

本文标题：A Conference on Religion and Ethics